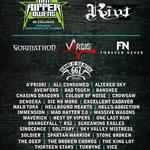 We want to thank everyone who has been in touch through VardisRocks.com, Facebook and Twitter from all over the world to share condolences and memories of Terry Horbury. It has been a great comfort to his family and friends to see how loved and respected he is amongst fans and within the industry. The support of SPV/Steamhammer, our bookers and promoters has been invaluable through this very difficult time.

2015 has come to a tragic conclusion, but Terry had great faith in the music we made together and was adamant that Vardis should continue to play even if he was unable to perform. We are in the final stages of mixing the new album, and will be back rehearsing in preparation for Up The Hammers next week. Hearing that huge driving bass through the speakers as ‘Red Eye’ comes together has been the most difficult and at the same time most perfect way to reflect on his profound absence and indestructible presence. We are lucky to have this album in the can, and to have captured the special chemistry of the Zodiac/Horbury/Clancy trio.

It still seems crazy that Terry won't be with us for the next chapter, but the book is not closed yet: music is the only sane response, and it’s the only one Terry wanted. So, we pay tribute the only way we know how, and will see you at Wildfire Festival (Scotland, 26/6), with Satan at LittleDevil (Tilburg, NL 9/5) and Heavy Metal Night 9 (Abruzzo, IT 17/9) as well as all other previously announced tour dates. Ticket links are available through the Bandsintown tab on Facebook and VardisRocks.com. Further shows and info regarding who will take up the mantle of Vardis bassist will be announced shortly.

Until then, raise a glass to those we’ve lost this year with those you love. We wish you all health and happiness for 2016.