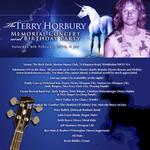 Last weekend’s Terry Horbury Memorial Concert was an unforgettable evening, on what would have been his 66th Birthday. With his family, friends and bandmates from down the years in attendance there was a lot of love in the room for a very special man. We want to thank everyone who gave up their time and energy to put together a celebration he would have loved, full of music, laughter and shared memories, but especially Claire Mendelsohn and Danny Hynes for coordinating such a fitting tribute. Over £1000 was raised on the night for Terry’s nominated charity, Bransby Horses - Rescue and Welfare.